We didn’t get anything done on the renovation this weekend. Dan and Thomas spent Saturday at a kids hunting event, skeet shooting, bow and arrow shooting and finally pheasant hunting. Thomas fired 3 shots but did not kill any poor birds. On Friday, however, Dan went pheasant hunting with a friend and did kill 3 birds. He brought them home for him and Thomas to skin and clean in the back yard. I’m not so sure I like this new hobby of there’s.

Then on Sunday we needed to get the yard cleaned up for winter. All the pots that were still sitting around needed to be put away in the lean-to. And the pond needed to be drained and dismantled. In the midst of cleaning things up Dan decided to pull out all of his stored wood from underneath the shed to see what he could use during the renovation. He got about 1/2 of it pulled out when something alive dropped down on his head. Let me back up and explain that to get underneath the shed you have to shimmy on your belly, so there is not a quick or easy way to escape. While I did miss seeing Dan reverse shimmy in high speed. I did hear enough commotion that I had to go outside to see what was happening.

After Thomas helped brush off Dan and Dan finished cussing and jumping around, they got flash lights and headed back to the shed to see what it was that attacked Dan.

And here’s what they found…a helpless, scared and huge possum! Look at how cool the ear is. 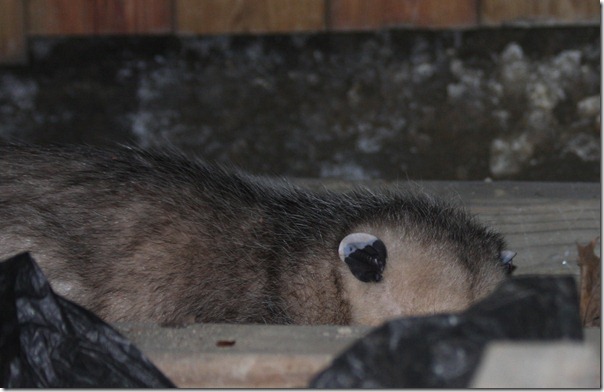 Dan then attempted to prod it out…

but that didn’t work.

Then they had the brilliant idea to go get our neighbor, Matt, along with his new paintball gun. They figured if they shot the paintball near the possum it would scare it out. Maybe if the possum just saw how crazy Matt looked it would have ran in fear.

No one wanted to be too near the opening/exit to the shed when the possum came running out.

But the possum hid, and not surprisingly did not run out while being shot at. 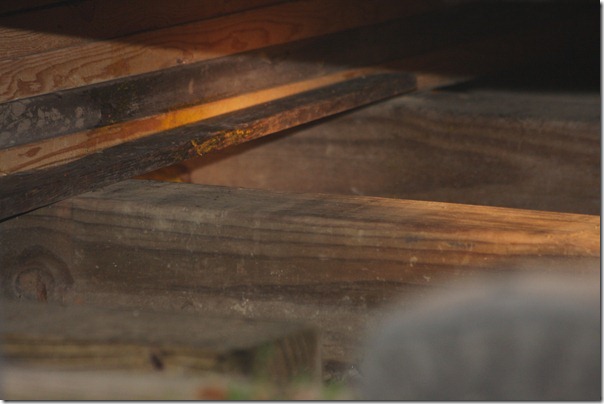 Then Dan went into full commando mode, shooting indiscriminately underneath the shed. His own form of “shock and awe.” But the poor possum just kept safe in its bunker and did not give up it’s new winter home.

In the end Dan gave up and the possum won this battle. Dan could not pull the rest of the wood out from underneath the shed and had to leave the possum to his new home. I believe step 2 will entail setting a trap.

Possibly this is Karma for killing those pretty pheasant on Friday.

2 thoughts on “a slow (but exciting) weekend”